Got this pen on Valentine's Day, two weeks ahead was on sale on Ebay. This is the Passaporto by Stipula a tiny pen(can't tell by the picture), it fills with an eyedropper and been writing for five hours and doesn't exhaust the ink, huge reservoir and filled it with brown Pelican ink(I am partial to violet and brown) the color of the skin, the color of the night-sky. I do my journaling by pen and I been collecting them since my first one in 1990. This pen was $27, one has to see and be at the right time for these sales. I have a Stipula Vedo which bought from the same guy in 2006 and write with it daily. I adore Italian pens. I haven't bought anything expensive since 2000 when I work self-employed and make much less.That is my guitar slide besides it. I been always writing though why bother with the net? 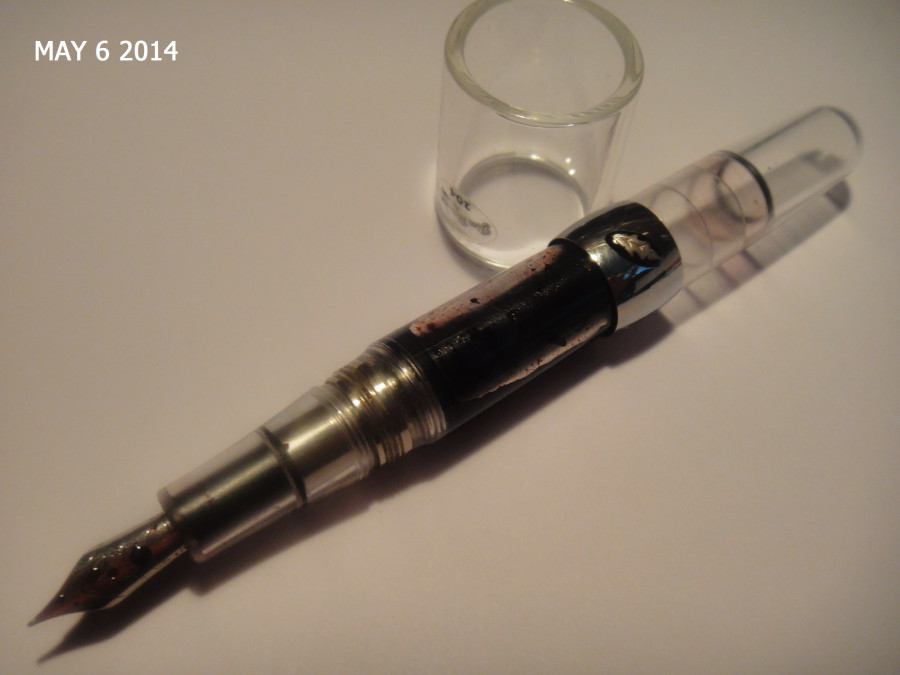 I remember when I bought this the date on it and I use it everyday almost sometimes more than once a day. I bought this with a book of Bede Griffiths and a straw porkpie hat that I used back then but had bought others since then that fit better with what I am wearing. I drink English tea, but not exclusively oolong and I had green tea just now. There are oranges I buy at Aldi or Trader Joe two new places of recent I go 98% of my shopping!!! Before July ends like to say that on July 3 was Jim Morrison(already mentioned Morrison earlier)death as well as Brian Jones of the Rolling Stones who died in 1968. Jones was a very talented guy ~ that with Bill Wyman made a great psychedelic era Stones. Wyman had a great album which I occasionally listen to Monkey Grip. Here is the end of a very hot July and a hotter August. I was around as Storm Bonnie past through quit a violent hour only of rain and winds. Let you know how the hurricanes flow through, have a fun August!

There were just playing recorder music on the radio, wow I seldom hear that, they said it was a primitive instrument. Recorders some of these can be extremely expensive, so one has to be wacked out of their minds to spend a few grands on a recorder, professional one. I have a very expensive Gibson mandolin. You never hear classical mandolin on the radio. I dislike it when they play a Vivaldi concerto that suppose to be for mandolin always, ALWAYS on guitar. I take the radio off. I am overwhelmed when they play a concerto for mandolin only heard it once. There has been three classical stations in S FL since I been alive. I was around for the first airing of the first one you could hear the Third of Beethoven in its entire. The classical stations are just easy listening stations. In the 80's when I was a teen there were three of four but they also played pop songs and arrangements of those songs. John Lennon use to listen to his songs very often and naturally complained they were the same ones. I am always out working and studying and then when I get home I never go to the computer, NEVER! I just have a little time only on Tuesday to write a little bagatelle here and I am not going anywhere else this week. When I am home I am banging on my Stratocaster, Telecaster or viola or sax, if i am not cooking. I watch the news playing guitar or sax, etc. I have the radio on like Lennon did when I cook. I know the net on Last FM has great radio and I have a place there, but no time in the least now, when I will have time, don't know, more interested in having time to go to the beach. My 69 Telecaster had a slight fall from the stand and the nut broke and I have to fix it soon. I love that instrument, but am lucky that i don't have to run out too fast to fix it. One has to have lots of cds and records to listen to good classical like Ives, Berg, Bruckner, Mahler, etc. one will never hear it otherwise

Michael McClure (a friend of Richard Brautigan, also a mentor and friend of Jim Morrison with Morrison he wrote The Mad Club in Sunset Blvd(I also happen to live there one day too in California, but mostly in LA, as a child)Morrison's which death was July 3, 1971).

Sleepwalkers . . . Ghosts! Voices
like bodies coming through the mists of sleep,
we float about each other --

bare feet not touching the floor.
Talking in our lovers' voice
NAMING THE OBJECTS OF LOVE

(Inventing new tortures,
machines to carry us.
Wonders full blown in our faces.
Eyes like sapphires or opals.
Aloof as miracles. Hearing
jazz in the air. We are passing --

my shoulders won't hold you.

HEROIC ACTS
won't free us. Free us. Love.
We are voices. Sleep is with us.

I never have bad dreams, must be my life doesn’t have lots of money to lose. I live with just enough to get by and have all my strings( little expenses) I have a used car from the early 90’s so I don’t have that expense which be very difficult. I can’t eat out or see a movie for that would break the budget, haven’t had bad nightmares on not having. The last movie I saw was "Across the Universe" Never Change my World, of the Beatles that says everything about me, want to see Pray, Eat Love next. Seen Frida Kahlo(with Selma Hayek) is on Google today her birthday, I saw the movie about her which was excellent at that time I use to see four movies a year, the movies were better then less commercial. I spend a long time cooking and make Oriental and Italian dishes that Machico and I love and there is no use in wasting money that I might need for car repairs or emergency. I bought this laptop for I needed something new and that was a little allowed expensive since I don’t update it every year. I carry a cell phone to be in touch with Machico but really don’t need it. The only thing I miss is not being able to be on cheap vacation, for one day on a expensive vacation is like three months on a cheap one. Funny but I ate bread and cheese and can soup seldom ate out, only three time in Europe in Far East it is cheap and ate out over a dozen times, mind you getting sick with the water, should have kept with only bottle water. Life is fun at least I am not loved for my money but for my interest and the similarity with my Machico.

flowing in the rain

There is no despair in the unconscious~

the multitude of time that stares

such a bright gift to those

in the pale grey storm

flowing in the streams rain ~

makes us ponder, as the musical pastoral,

childhood of a coral lost with the sea horse

on a beach shallow waters ~ a dream know,

blazing the dawn’s light through the reef’s water,

the conches sound, the dusk ~

the children rising from their sandcastles,

as the mother calls, to enter the evenings call. by violaluv

Ever since I was young enough to read I got into world religions and Zen and Vedanta in particular. My music has flowed from these wellspring as it was greatly admired by Aldous Huxley and Christopher Isherwood and the Alan Watts which I read everything he wrote at one time. I am here at school with a few copies of American Poetry Review which I haven't been able to read for a while, but will shortly. It is summer now very hot in Florida and always in the news is the oil spill. I hope that I can go to the beach before any oil spill, for that is my year round fun on the beach especially in summer. In summer one always eats the summery cold salads, and sandwiches. My eating has always been around Zen and Yoga ideas. One fine tunes to the ukulele sound and the songs that pour forth into splashes of fountain pen colors. We take these roads where ever they take us and to me on paper it been fountain pen recollections or presences.

Belief & Techniques For Modern Prose by Jack Kerouac
List of Essentials:
1. Scribbled secret notebooks, wild typewritten pages for yr own joy
2. Submissive to everything, open, listening
3. Try never get drunk outside yr own house
4. Be in love with your own life
5. Something that you feel will find its own form
6. Be crazy dumb saint of the mind
7. Blow as deep as you want to blow
8. Write what you want bottomless from the bottom of mind
9. The unspeakable vision of the individual
10. No time for poetry but exactly what is
11. Visionary tics shivering in the chest
12. In strange trance fixation dreaming of the object before you
13. Remove literary, grammatical and syntactical inhibitions
14. Like Proust be an old teahead of time
15. Telling the true story of the world in interior monolog
16. The jewel center of interest is the eye within the eye
17. Write in recollection and amazement for yourself
18. Work from pithy middle eye out, swimming in sea language & knowledge
19. Accept loss forever
20. Believe in the holy contours of life
21. Struggle to sketch the flow that already exist intact in the mind
22. Don’t think of words when you stop but see the picture better
23. Keep track of every date emblazoned in your morning
24. No fear of shame in dignity of yr experience, language and knowledge
25. Write for the world to see yr exact picture of it
26. Bookmovie is the movie in words, the visual American form
27. In praise of Character in Bleak inhuman Loneliness
28. Composing wild, undisciplined, pure, coming in from under,crazier the better
29. You’re a genius all the time.
30. Writer ~ Director of Earthly movie Sponsored & Angeled in Heaven


copied this from a book

I love writing with a oblique double broad fountain pen of Pelican. With the Pelicans pens you can change the nibs and buy new ones. This is a Pelican 100 and is a calligraphy pen of 1.5, 2.0, but bought a oblique double broad, changed with the help of Pendemonium at 15 dollars. The pen was bought at an art store for less than 30 dollars a decade ago. I use medium a lot too and from that art store, which closed its pen department I have a Delta of red, beautiful Italian pen. The Italians make the most beautiful pen, there is no doubt in my mind!
http://www.pendemonium.com/

Also on Ebay I bought a lot of Noodler's ink which comes in all shades of colors, one can check it all out in pendumonium. Ebay is a very good place to shop. I don't need anything right now, a bottle of ink last forever when you have many. The white 100 Pelican I bought on Ebay for 20 bucks. That bottle is a bottle of Beaver of Noodler's, dark brown)